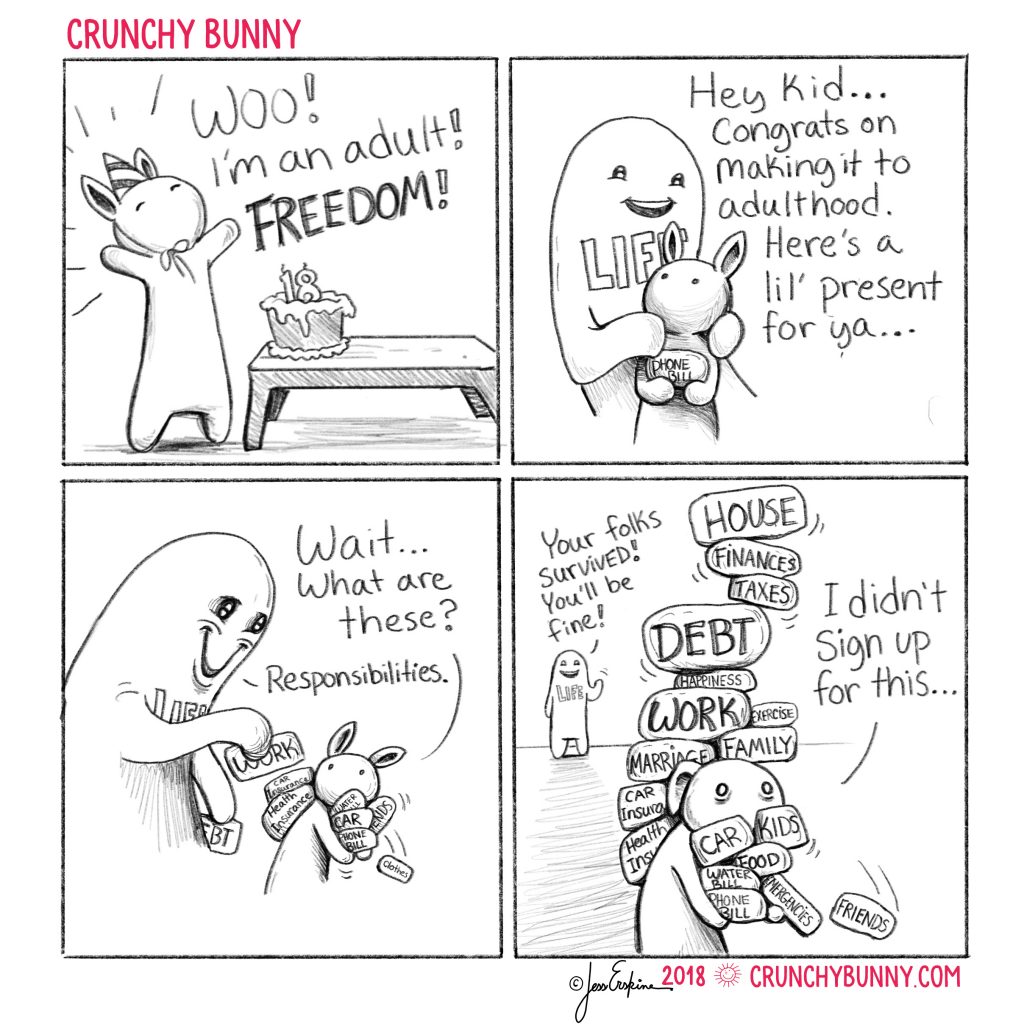 I’m not good at keeping up with things. I forget to take my vitamins, I forget to thaw chicken for tomorrow’s dinner, I forget to work out, I forget to call friends. I make to-do lists that I forget to look at, and sometimes I’m so unmotivated I write down easy tasks that I can cross off to feel more productive: “Get the mail”, “clean off your desk”, “poop”.

I get easily overwhelmed and then the dreaded anxiety kicks in. My mom is the exact opposite. She has a specific day and a specific time of day for the things she needs to do. She doesn’t even think twice about it- she just does stuff, then still manages to get dinner on the table before 6:30!

So I dropped the ball on Inktober…I knew I would before I even started, which made me second guess myself weeks before the first day. I made it 6 days. As soon as I started adding an Inktober illustration to what I was already drawing, along with cooking, keeping the house (decently) clean, prepping for my brother’s MASSIVE Halloween party, planning mom’s bday party and putting together our Halloween costumes, I got overwhelmed.

The next 25 days seemed so daunting that I just said: “Welp, I can’t do this!”, and threw in the towel.

I’m not trying to complain (but I am complaining), I just feel guilty. I’m a big fan of Jake Parker (creator of Inktober) and all he does (have you seen all the stuff that guy can accomplish?!) and I’m a fan of the concept of Inktober. Failing feels bad, like I let Jake and everyone down. Why can’t I just keep up?

That was when I realized Mr. Parker doesn’t know who I am, and only a handful of people pay attention to what I do, so the only person my failure affected was me. “Okay, whew!”

Then, after realizing how small my impact on the world is, I got really bummed out and hosted a little pity-party for myself and invited Michael, who declined.

Instead, Michael cancelled my party, pulled my head out of the sand and sat me down for a nice talk with some serious grace perspective, and hugs. (I really don’t deserve that man.)

Allowing myself to fail and others to fail is a huge thing that I have neglected to practice. Forgiveness. We’re not going to feel great every day, we’re going to get grumpy and frustrated. We’re going to focus on the wrong things like that little bit of extra stuffing around the middle and how we feel like so-and-so doesn’t like us very much or the amount of times we need to check social media.  We’re going to mess up, we’re allowed to fail; and the cool part is that we’re loved anyway.

I’ll keep making lists, and keep forgetting to look at them, and that’s OK.

PS. If you’ve got a few extra minutes, here’s a good article from one of my favorite sites about being human, and dealing with other humans:

MockingBird – I’m not very good at this…

And one of my favorite songs that always makes me feel better when I’m stressing out:

The Travelling Wilburys – “End Of The Line”